Coffee is one of my favorite things in the world. When I was in college, and young and stupid, I used coffee for its caffeine, which gave me the fortitude to pull all-nighters and write ridiculous papers in Spanish. As I got older, I fell in love with the sweet and creamy beverages at Starbucks, adulterating my coffee with sugar, cream, syrup, “flavor”, and whatever else they had on offer. To be fair, if you’ve ever had an actual cup of Starbucks coffee, you’ll understand the need to hide in amongst all the fluff. But Starbucks, not unlike the tobacco industry, has managed to create a brew that nearly doubles the traditional dosage of caffeine in a cup of coffee and in the process created a new generation of supposed “coffee-lovers”.

But I’m older and wiser now. I understand how magical coffee really is, and howpowerful it can be. Of course, I’m certainly not the first, coffee has in Colombiahad an intricate role in defining culture for 500 years. Its origins aren’t certain, but the story we heard says that Ethiopian shepherds first noticed their goats acting a little frisky and energetic after eating a specific bean. So they picked a few and tried to chow down on it themselves. The flavor was awful and the cherry itself difficult to chew, so, the tradition goes, they threw the beans in the fire to dispose of. And from there, an amazing aroma arose leading to both the discovery of the roasting process and the possibility of brewing a beverage from the beans.

More likely, though, the beans were eaten, possible mixed with other substances, though at some point, someone must have realized the brewing process and then, of course, the addition of milk (and sweeteners). But as coffee domestication arose and cultivation grew, the consumption of coffee spread first through the Islamic world and then into Europe, where it came to be associated with amazing bouts of creativity and later with rebellion and stirring. Coffee was banned in England for a while, and also in Turkey, because so-called subversives would drink it while  secretly meeting to foment upheaval.

Today, coffee is grown in many countries in the Bean Belt, and there are a few varieties of beans. One of the largest producers in the world is Colombia, a country that recognized the potential of coffee as an agricultural export. In the early part of the 20th century, coffee growers unionized and the Federación Nacional de Cafeteros de Colombia was formed in 1927 to support Colombian farmers with research and incentives to export. Today, coffee grows in the Zona or Eje Cafetera in Colombia (mostly mountainous regions) and supports some half-million farming families.

We had an opportunity to spend a few days in the Eje Cafetera, where we visited a coffee finca called Recuca (near Salento). This was my second time at a finca (first time a small family farm in Nicaragua) and I was struck by how commercial it was. The finca had an educational tour set up (mostly Colombian tourists) and they led us through the process of production, from growing the crops for several years before a cherry is produced through to the grinding and brewing of coffee. For those who don’t know – coffee is best grown in the shade of a forest, but these days it is grown on wide open tracts of land with full sun, as that allows the cherries to ripen faster (it also requires more agricultural inputs, including pesticides, a situation not unlike commercial tea growing). The cherries are picked when they are brightest red, then dried and stripped to reveal the bean itself. The bean is then dried and is ready to be shipped. Or it can be roasted on site, but the shelf life of a roasted bean is shorter than unroasted.

One thing you learn in the process of coming to love coffee is that all you ever thought you knew about coffee flavor is wrong. Dark and bitter and strong is not how coffee is traditionally brewed, unless it is a specific type of brewing (such as Turkish coffee). But the dark tarry cups of joe you can buy at Starbucks and Dunkin Donuts, etc, need all that milk and sugar to hide what horrible things they’ve done to perfectly decent beans. 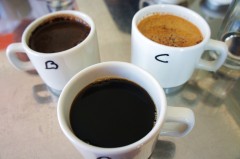 At Recuca, we attended a coffee tasting, or catacion. We were first told about the various aromas that coffee can hold, ranging from leathery to fruity to floraly to a scent not unlike tobacco (and many many more). Then the various categories of taste, including sweet, salty, bitter, sour and acidic. Then there is body and astringency. While coffee’s characteristic flavor is bitter, it should not be too bitter and should in fact be balanced by a bright acidity and a touch of sweetness. It should also have a full body feel (like whole milk) and a soft moistness. In other words, if you curl up your nose or pucker your mouth after taking a sip, it’s simply not good coffee.

The flavor is affected not just by the growing of the coffee but the quality of the beans. Beans should be fat and whole and not cracked (cracked beans are used for instant coffee and other coffees of lesser quality). They should also be roasted to a medium tan color (not dark brown) to avoid the excessive bitterness. The overroasting of beans, while it can concentrate caffeine is usually done to hide the diminished quality of the beans. And then finally, the grinding matters too, and the brewing process as well. Or, more importantly, the grind and the brew should be appropriately matched to develop the most ideal strength and flavor. 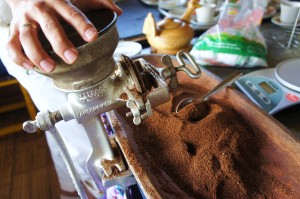 While brewing brings its own considerations in terms of health (there is some concern that coffee oils affected by roasting might be carcinogenic, so a filter is often the best way to remove those oils), it also highly affects flavor and becomes a trade-off for the coffee fanatic. 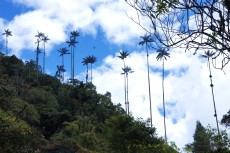 The Zona Cafetera is not just about coffee, though. It’s a beautiful countryside full of lovely and warm people. There are the usual mid-sized overcrowded cities, but they are very easy to avoid. While in the region, we also visited the Termales of Santa Rosa, and took a horse back riding expedition in the Colca Valley, home of the palmas de cera. The horse trail was rather muddy and steep, and while there were moments where I was certain my horse and I were going to go tumbling down the mountainside,I still think I preferred going via horse vs foot. At the top of the trail, we passed through the cloud forest, where the biodiversity of the region changes (and, we were told, there exists bears and colorful birds – we only managed to see hummingbirds).

The Eje Cafetera is not a usual stop-off for foreign tourists in Colombia (the coasts and cities draw greater appeal), but it’s another little-seen aspect of a country that is still not high on tourism lists. Which of course means it’s an ideal time for a visit. And hopefully, the more people visit the authentic homes of coffee in the world, the more we’ll demand better coffee, and the more available it will be.