While in Cali, Colombia, I had the opportunity to spend the day at the zoo. Normally, that’s not my idea of how to spend the day while vacationing in another country, but much has been said about the zoo in Cali. While it’s not on par with San Diego and the like, I found it very interesting. One of the main draws is the focus on Colombian wildlife – sort of a catalog of the local flora and fauna. Colombia has an incredible biodiversity, and its recent history of violence and conflict has, for better or worse, provided an opportunity to preserve some of that. And more recently a number of foundations have cropped up to address social and environmental issues (though, one must be wonder where some of those foundations have come from…). 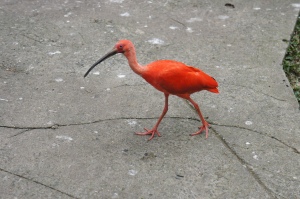 So, off to the zoo I went. I walked from my hostel (which turned out to be something like 3 miles each way), and got a nice walking tour of the city as well (San Antonia, Tertulia, Parque de Gatos, etc). The zoo itself is in a rather nice residential area pretty much at the end of a road, so you can’t miss it (if you are on the right road). I can’t remember what I paid, maybe 14000 COP? I ended up spending about 3 hours there, before walking back to my hostel. While the walk itself was hot and sweaty, the zoo area was a lot cooler with a nice breeze.

There a clear path marked out for you to follow from start to finish, though you could certainly reverse the path if you want. But it’s not really possibly to just wander aimlessly here and there – the pathways, while branching into little cul-de-sacs, didn’t really connect to each other. Still, it’s nice to have a set route so you don’t miss anything.

The zoo starts with birds, and it is a nice touch that you can walk into the birdhouse with the birds themselves. It’s followed by primates, who aren’t in the greatest of surroundings (too cage-like, and far far too small). However, here you get the first indicate that Colombia has made a commitment to biodiversity and protection of species, and there will be a new primate home in the coming years. The rest of the zoo is fairly standard in terms of large enclosures (though really, not large enough) and an attempt at natural environment. Aquatic life, amphibians, and reptiles are mostly in glass terrarium/aquarium type enclosures. Most of the animals are in fairly decent housing, but a few stick out to me as not being enough. In particular, the tigers have clearly gone mad. There are two – an orange one and a white one – and they spend their time pacing. The white one in particular, paces in front of the glass window into the enclosure, brushing up against the glass constantly. I suspect the grizzly is in similar straits.

Still, I can’t help but admire the attempt. A lot has been written about zoos and their pros and cons, and I won’t go into that here. But I’ve seen zoos in a lot of countries, and some horrific conditions for the animals, and I think they could do a lot worse than Cali. In particular, the attempt to showcase the wide array of Colombian wildlife, coupled with the very clear directive towards national pride (and protection of diversity) definitely holds promise for conservation efforts in Colombia.